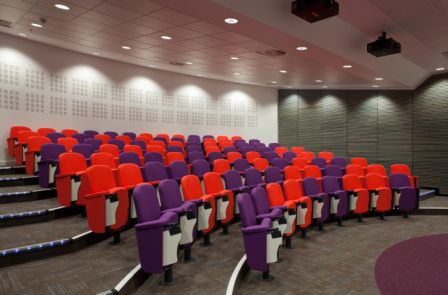 The Freeman Hospital has an international reputation for its pioneering expertise in transplant surgery for adults and children, recognised as one of Europe’s leading lung transplant centre’s, having performed both the first single and double lung transplant in Europe.

The Institute of Transplantation is located in a purpose built, state of the art building attached to the Freeman Hospital. The site provides 4 oversized and ultra clean theatres, an intensive care facility and Research and Development resources. On the top floor a state of the art lecture theatre and two seminar rooms are provided to support the NHS Trusts’ commitment to education.

To provide a “state of the art” lecture theatre and two seminar rooms, with the ability to show a mixture of audio visual sources, computer graphics, local content, clinical notes, x-ray images, photography and a live video stream from the operating theatres. The imagery had to be available in the lecture theatre on a large viewing screen as well as smaller screens in the seminar rooms, whilst maintaining the integrity of the original source material. The solution had to have the ability to reach larger audiences through IP and video conferencing and be user friendly as it would be used by a variety of people, most of whom would be unfamiliar with the set up. 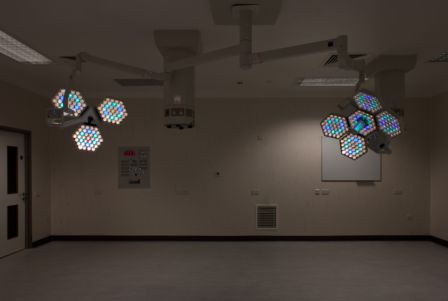 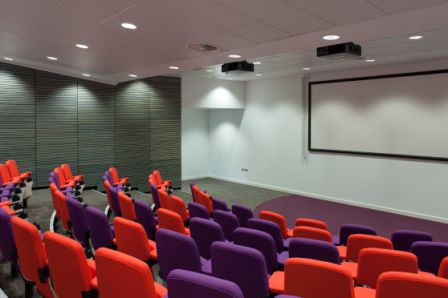 Universal were contacted by Stephen Watts the project manager at the Royal Victoria Infirmary (RVI) Estates Department. Initial meetings were arranged on site in order for Universal to fully understand the scale of the project.
Two key requirements identified by Universal were that the integrity of the image had to be maintained at all times and the system had to be easily operated. With this in mind a detailed proposal document and budget was presented to the NUTH NHS Foundation Trust.

1. Lecture Theatre
Universal proposed a single bespoke fixed frame screen measuring 5.3m x 2.18m. All media sources were fed in to a Di-Ventix11 Multi layer hi resolution seamless switcher, which was used to send the image to the lecture theatre and/or seminar rooms. Two Panasonic PT-DZ6700EL projectors were ceiling mounted to produce either one complete image from any source, or two mixed images from any two sources.

A lectern was used to house the equipment designed to allow the lecturer to deliver a lecture without the need for technical support. A touch screen control system was provided to allow various pieces of equipment to be controlled by the lecturer as and when required.

A 16:9 ratio electric retractable wall screen and Panasonic PT-FW430 projector were installed. An AV cabinet was provided for use by the lecturer for storage or teaching purposes and an Extron MLC-62 was used to provide basic control functions. A connection providing a video stream from the lecture theatre was also provided.

A 47” HD LCD screen was supplied to the smaller of the two seminar rooms with an AV cabinet for use by the lecturer for storage or teaching purposes and an Extron MLC-62 was used to provide basic control functions. A connection providing a video stream from the lecture theatre was also provided.

Universal engineers carried out initial site visits to familiarise themselves with the project and to identify any issues. Health and Safety risk assessments and method statements were produced and submitted to the contractor.

Universal engineers worked closely with a variety of contractors on the new build project from the start to ensure that the AV element ran smoothly. Architects, Main Contractors, Building Contractors, Mechanical and Electrical contractors, the client and other suppliers were all included to discuss details of the project. Universal had to co-ordinate with the contractors and adhere to a timetable during installation. A first fix of the projector brackets and cables was carried out whilst the building was still without lights and electrics, the second fix of the projection screen, projectors, lectern and all other equipment was completed a couple of weeks before the handover and went ahead without complication.

The project ran to budget and was completed in July 2011 in time for the main contractor to hand over the building to NUTH NHS Foundation Trust.

Universal have since returned to the hospital and have installed Video Conferencing systems in the Lecture Theatre and Seminar Room. 4 x Clevertouch 42” touch screen monitors and 4 x Sony 42 DICOM LCD displays with HDSDI cards have also been installed in four operating theatres to be used by Freeman Hospital staff during the performance of medical operations.

The Polycom HDX7000-720 was used in the seminar rooms and the HDX8000-720 was used in the Lecture theatre as both systems deliver HD voice, HD video and HD content for exceptional performance. The solutions comes with Polycom People+Content™ collaboration technology, allowing users to share presentations, graphics and rich media content and live video simultaneously.

Mr Michael Bell, Deputy Head of Estates and Facilities, Newcastle upon Tyne Hospitals NHS Foundation Trust commented: “We were delighted with the installation and high quality of the product. The after sales service has been particularly good which is a requirement of the clinical service Freeman Hospital provides.”